Promote Your Page Too

I hope that you find my weekly journal of the latest and greatest in Charleston, South Carolina's world of food and restaurants to be informative and enjoyable. The Charleston food world is our oyster. Let's dig in and eat!

I am an award winning food writer, cookbook author, long-standing restaurant critic, and Cordon Bleu (Paris) trained chef with a Grand Diplome in pastry and cuisine. Food is my life and I try to bring it to you through my work.

A (Temporary) Farewell to Tarts 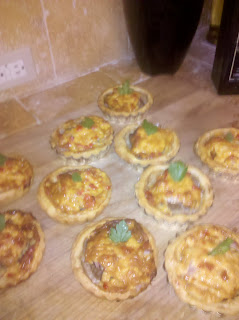 It's been five long months in the coming. Nights of creative tart thoughts turned into mornings of new tart recipe creations, followed by afternoons of buttery aromas wafting through the house, followed by yet another evening of tart possibility dreams.

It was an exciting time. Despite the tarts' relentless creativity call, it was a welcome opportunity after nearly a year on the road promoting Charleston Chef's Table (Three Forks, Dec., 2009) and Southern Farmers Market Cookbook (Gibbs Smith, June 2009). Being in the kitchen, is, after all, what I love best. So, to be there, snuggled in the warm aromas of baking tarts and tartlets, with the loving shadows of my dog Tann Mann and cat Chutney within flour-dusted arms reach, was pure delight.

We developed a cadence, the three of us. First stop, coffee and breakfast for me, food and walks for them. Next stop, the meditative process of making pastry, sometimes three batches at a time for the late morning and early afternoon recipe testings. Once the tarts were out of the oven, the next step was to deliver them to neighbors and, on some days, the construction crew that was building the house across the street. It was nurturing and peaceful and fluid. And, even when the taste-testing news was not always perfect, it always felt like a good days work.

Well, now the house across the street is complete, and so is the recipe testing stage of "Tart Love" - Sassy, Sweet, Savory and Southern. The simultaneous timing of the end of the house building and tart creations seems ironic and emotional, somehow. The next step, starting tomorrow, is to complete the writing of the book, which will be released next fall (Gibbs Smith). Saying goodbye to the tart-making step of the process feels a little bit like sending a young child off to school. I can bid goodbye, only knowing they'll be back later that afternoon (or later this holiday season) to warm my heart and my belly. For now, the final writing and editing stages begin and I'll have to bid a temporary farewell to my beloved tarts until they come back to me in book form sometime next year.

I can't thank my wonderful photographer Helene DuJardin enough for her tireless efforts and beautiful photography. My neighbors and pets always get thanks, just for being them. The photo above is of the final tartlet tested for the book, and it's not by Helene (just so you know!), but by me. They are Pimento Cheeseburger Tartlets, savory, final odes to a wonderful journey I will not soon forget.

Look for recipes from the nascent book in the several months prior to its eventual release in fall 2011. Happy cooking!
Posted by About Holly Herrick at 2:19 PM

When I was a little girl, I marveled while watching my Great Aunt Frances sitting at her linoleum-topped kitchen table, cutting coupons from the daily newspaper in the tiny Kansas town she lived in until she was nearly 100 years old.

It seemed like such a waste of energy in order to save a few pennies on, what I thought, were probably things she wouldn't normally buy anyway. But, I was naive. She, a thrifty survivor of the Great Depression and the Dust Bowl, had her coupon system down pat and it's probably one of the reasons she made it through a long life of hard times, many of them spent alone.

The latest bout of monetary unpleasantness, however, has created a market for New Age couponing systems. The internet now has a number of hot coupon sites (I like couponmom.com) which provide free, brand-name coupons and more if you select to register as a member. They're just a click, a printer, and five minutes away. In addition, many grocery stores' websites offer lists of daily specials. And, here's the kicker. Many provide selections from the kind of items you usually purchase, anyway. That was it for me. The last straw supporting my long-standing anti-coupon mindset finally broke its resistant back.

Harris Teeter's online specials shopping list became this list-hater's new best friend. I dipped into it with reckless abandon. With a little practice and increasing knowledge, I'm slowly forming my own semi-profitable coupon system. By combining the free manufacturer's coupons from sites like couponmom.com with a daily special shopping list constructed from Harris Teeter's web site (harristeeter.com) , my handy VIC card, and an extra dose of concentration at the grocery store, I have scored some serious savings.

The best yet happened last week. Granted, it was a big sales day at the downtown Teeter. The store was offering buy one get one, two or even three, all over the place on big ticket items like beef, coffee and wine. Since I'm expecting company in a couple weeks, I decided to stock up on these and other staples. The net result was a whopping $67 total savings. In essence, I bought three weeks-worth of groceries for less than I usually spend in one week!

My heart raced with anticipation as I watched the basket cave with the weight of my cache and the numbers creeping slowly higher on the cash register. Then, as the cashier started calculating in the selected coupons, the numbers amazingly started going down. It was like getting on the scale after a week of gorging Haagen-Dazs only to find you'd lost five pounds. I was beaming. She was beaming and said, "You did good today!"

Admittedly, a follow-up trip to replenish the fresh vegetable drawer just one week later only yielded $10 in savings, but next time I'll do better. I'm on a coupon-crazed mission. Intelligent use of coupons and smart shopping add up to saving a lot more than pennies. And, I'm not in Kansas anymore.

With grocery costs rocketing to the stratosphere, it’s imperative to save wherever you can at the supermarket without eliminating taste. In addition to reaching for reduced daily specials, what you buy and how you put it to use in your kitchen can happily translate to huge savings with bodacious bite.

In this era of grocery gouging, chicken can become your new best friend for just pennies per four ounce serving when paired with practical pantry staples like pasta and veggies. Low in fat, high in protein and exceptionally versatile, chicken marries equally well with the exotic (think truffles or saffron) to the humble (think roasted potatoes and rosemary).

For these reasons, it’s a regular menu guest at my house, where I pride myself on transforming a single, four pound chicken (preferably organic and purchased at a reduced rate) into four fabulous feasts for a group of four. That’s sixteen meals, folks! A four pound chicken runs anywhere from $6-$10 (depending on where and how you shop), throw in a little change for ingredients to flesh it out into a meal (4X), and you’re looking at less than $20. A night out for a family of four at any fast food favorite will set you back the same amount or more faster than you can say “heart attack”.

Gotcha? Let me tell you how it’s done!

Meal #1: This is the launching pad for the meal plan event(s) – a whole roasted chicken. Since it’s going to be transformed several times, keep the seasoning simple – ground pepper, a nice crust of coarse salt and a rub down with olive oil. Roast at 425 until done (about 20 minutes per pound) and top it with a few love pats of butter to sink deeply into the bird. Allow the roasted chicken to rest and re-absorb its juices. Cut the both legs and thighs away from the chicken (reserving warm). Cut the breasts away from the rib cage, cool and store in your refrigerator for later use. Serve both legs and both thighs with steamed vegetables and roasted potatoes for a satisfying, nutritional meal. Go ahead and prepare a pan gravy with a little roux, white wine, chicken stock, Dijon mustard and fresh tarragon to dress things up, but hold on to the carcass!

Meal #2: Start this after the roast chicken dinner to prepare for tomorrow’s old-fashioned and DELICIOUS chicken noodle soup. With a sturdy chef’s knife, cut up the reserved carcass remnants – the rib cage and spine – into four or five coarse chunks and put them in a two quart soup pot with a quartered onion, carrot, celery stalk and a clove or two of garlic to make an impromptu stock. Add a few peppercorns, a bay leaf and fresh thyme for added flavor. Bring it up to a boil, reduce to a slow simmer over low heat and forget about it for three to four hours. Allow to cool and refrigerate, covered, overnight.
About thirty minutes before you’re slotted to serve dinner, skim off any accumulated fat off the top of the stock, strain it, discarding all solids except any bits of chicken flesh. Finely chop an onion, carrot and celery stalk and sauté them in the same pot with a tablespoon of olive oil until softened. Season, return the strained stock to the pan and bring up to a boil. Add reserved chicken and about ¼ pound of dried pasta (flat noodles, spaghetti, linguini – your choice) and cook until tender. Serve with a drizzle of fresh herbs (parsley, tarragon, or thyme will do) and freshly grated Parmesan cheese. A small, fresh salad and warm baguette make this a meal.

Meal #3: Chicken Salad Deluxe! This is where you can really have fun with chicken’s flavor/texture marriage versatility. Cut one of the reserved breasts into chunky, ½” cubes and toss in a bowl with coarsely chopped dried cranberries (or another dried fruit like figs or currants), coarsely chopped roasted almonds, fresh herbs, a dollop of Dijon, a dash of mayo and vinegar, salt and pepper and you’ve got a meal in minutes over a bed of greens. Other flavors that work in tandem with chicken include curry, paprika, cinnamon and almost any fresh herb imaginable. Make this your own!

Meal #4: Chicken Sandwiches Supreme! Again, versatility and imagination set the stage for show-stopping chicken sandwiches prepared with freshly roasted chicken breast. Go for the best quality bread you can find, from baguette to whole grain, and fill it with thinly cut slices of the remaining breast and toppings. One sliced breast will handily complete four sandwiches. Zip up mayo with fresh basil and Dijon mustard for a fresh, personalized sauce, top with a slice of red onion and crisp romaine. Go whole hog and add a few pieces of browned bacon and a slice of avocado if the mood moves.

Chicken never tasted so good for so little.